My husband said Juni, our mixed-breed rescue dog, was the best dog we’ve ever had, and we’ve had some great ones.  I concurred. We based this on the combination of attributes that make her an easy dog to have around. She’s smart but not naughty like some intelligent dogs. She’s affectionate but not overly needy for attention. She likes to be around people, but yet will go off to be by herself. She will generally “go potty” on command. She barks some, but not constantly.

When we first brought her home, she was about a year and a half. We assumed no one had worked with her on basic commands like sit because she sure wasn’t following those commands right away. But one afternoon Tim was in the front yard with Juni. She was behind the big tree in front and he just happened to say “aqui” which means come here in Spanish. She took one look at him and raced across the yard and sat before him. It was enlightening to say the least. He looked up Spanish commands for dogs and by golly she was able to follow most of them. It wasn’t that she wasn’t trained; she wasn’t trained in English.

We believe her to be part Border Collie and German Short-Haired Pointer and who knows what else.  She points and is a hunter. She’s caught moles by leaping into snowbanks on our walks, killed a squirrel or two, brought a severed goose head into the front yard and no, I have no idea where the rest of the goose was and why the head ended up in our backyard. I have to be careful when I walk her because her strong prey instinct kicks in and at times lunges at prey bold enough to run in front of her. We’re working on tamping it down while on a leash.

On the Border Collie side, she lies down when other dogs approach. This could be submissive behavior, but it also could be the herder instinct as well because she waits until they get close then stands. Also, she likes to secure the yard and runs the border of our property, and when excited, she runs around in circles. She wants to herd other dogs but thankfully not children as other herders tend to do. She’s gentle with little ones, lies down as they approach, and relishes their attention.

The worst thing she ever did happened in the first few days after we got her. She found a new  black ink computer cartridge (my fault for storing it low to the ground) to chew on which left a huge puddle of black ink on the carpet in my office. By the way, ink comes out with rubbing alcohol. I Googled it. That big of a stain took a few bottles of alcohol and several days of elbow grease, but it came out. Mostly. She also has dug holes in my flower beds. Nice soft dirt.

So no, Juni’s not perfect, but damn near. She’s a great companion and a real keeper. 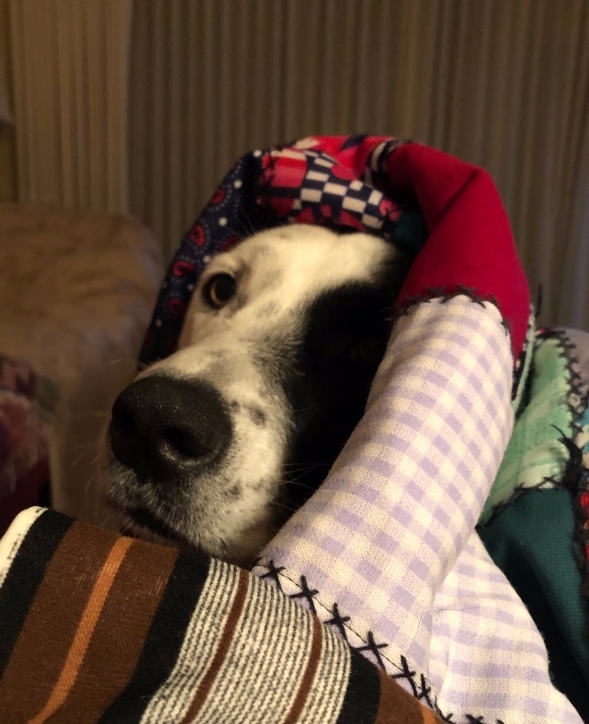 How can you resist that face?

They were real buddies.